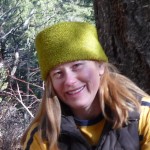 Prairie grew up on a ranch, Meadows Ranch, outside of Choteau. MT.  She learned early on the importance of border collies to their cattle operation.  It took her a long time to convince her dad she was responsible enough to have one of his puppies, and not only that, but to have one in the city.  Prairie brought Mesa to Bozeman in 2007 and they began puppy classes as soon as possible. Mesa and Prairie were educated in puppy and adolescent foundation (taken 3 times), agility, freestyle, and many more classes.  Prairie assisted is some of these classes including CGC classes and hiking classes. She then pursued the opportunity to continue to train on her own, believing all dog owners should be given humane instruction on training their companions.  She opened Rocking K9 Companions in October 2010.

Mesa and Prairie compete in NADAC Agility and MDSA Freestyle.  Mesa misses her friends in Bozeman, but is in heaven at home on the ranch working cattle using the foundation she has built the last 8 years with Prairie.

Ole joined the family in July of 2011.  Prairie knew she wanted her next dog to be a long haired, red and white male border collie, which is just the exact opposite of her short haired, black and white female, Mesa.  Ole enjoys attention from people and is very envious of anything Mesa thinks, says or does.  Ole gets up early in the morning while Mesa sleeps in.  He waits by the door to Mesa’s room, gently tossing the toy he’s chosen for the morning up and down, making just enough noise to tempt Mesa out of bed and play with him.  Prairie hopes Ole will be able to quietly work livestock in a close environment.

Prairie successfully completed her CPDT Certification and is a Member of the APDT Association.  She is also an AKC CGC Certifier and S.T.A.R Puppy Evaluator.